Purchase Signulous* using our referral link (Click Here) for a 1 time payment of $20 and get iPogo VIP for free†!

With iPogo you get a full set of tools to help you be the best. iPogo is a Simple, Powerful and Intuitive App. 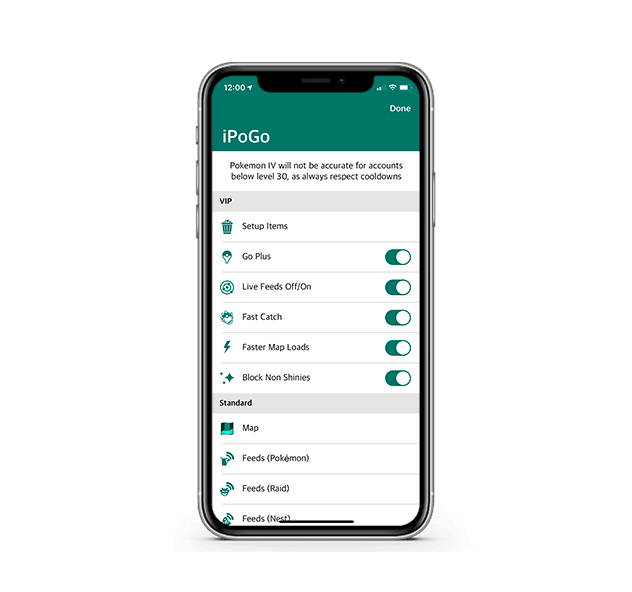 Purchase Signulous* using our referral link (Click Here) for a 1 time payment of $20 and get iPogo VIP for free†!

Welcome to iPogo Spoofing
What is/creating an alt account?
What is a cooldown?
Cooldown Triggers
Useful Links
What is Sniping and how do I do it?
What is Camping?
What are Speed Raids?
Spawns show the wrong Level
iPogo VIP Features List
Is iPogo for Android?
Direct Download
iPogo and iOS14
How do I install iPogo?
iPogo VIP Information
How to catch Shinies Only

#Top
This guide will walk you through iPogo and Spoofing. We will cover a large range of topics from the very basic spoofing questions all the way to more advanced stuff like manipulating time zones.

What is a cooldown?

Several examples would be the next Pokémon you attempt to catch will flee, a Raid will not work and a Pokéstop will not give you rewards. If you have used an action prior to teleporting within the past 2 hours you will need to calculate your Cooldown. If you did not use an action in the past 2 hours prior to teleporting, then you do not need to calculate your Cooldown. It is safe to assume when teleporting long distances you will need to wait the maximum Cooldown time which is 2 hours.

#Top
Actions that will trigger cooldown:
Catching a wild Pokémon (especially those coming from Incense, Lure Modules, Special Lures and Meltan’s Mystery Box)
Accidental drop of a ball on encounter screen (also applicable to raids)
Feeding a wild Pokémon with a berry (also applicable to raids)
Spinning a Pokéstop (especially getting a message Bag is Full due to item limit)
Spinning a Pokéstop with Try Again message due to spin limit
Placing a Pokémon in one of the gyms
Feeding a gym defender within screen radar (especially remote feeding as long as you are within the screen radar)
Gym battles
Fleeing Pokémon (due to catch limit)
Use of Gotcha device to spin and catch
Note: These actions will NOT reset or trigger another cooldown if you are already on cooldown.

Actions that will NOT trigger cooldown:
Teleporting
Encountering a wild Pokémon
Remote berry feeding of gym defender (from long distances)
Autowalk (minus spinning and catching)
Hatching eggs
Claiming quest and weekly rewards
Catching a reward Pokémon from quests
Speed raids (ensure you are off cooldown two hours prior to this)
Exchanging and opening gifts
Evolving a Pokémon
Powering up a Pokémon
Trading a Pokémon
Transferring a Pokémon (deleting from the bag)
Taking snapshots of a Pokémon
Changing a Buddy
Gaining Buddy candies
Using items (healing items, evolution items, TMs) on a Pokémon
Using Stardust and Candies to gain a second move for Pokémon
Using Incense, Lucky Egg and/or Starpiece
Deleting items from storage
Player vs player (PVP) battles
Team leader vs Player battle (battle with Blanche, Candela and/or Spark)
Placing a Lure Module or Special Lure on a Pokéstop
Purchasing coins and shop items
Changing of avatar items/clothes
Transferring a Pokémon to Switch to activate Mystery Box
Obtaining a free raid pass by clicking a gym with an active raid
Encountering and catching certain Pokémon from Photobombs such as Smeargle and Party Hat Pikachu
Dropping a ball on the ground (Given that you are already on Cooldown)

What is Sniping and how do I do it?

#Top
Sniping is the term we use to define “teleport and catch a Pokemon” which is far from your real location. In order to snipe, just enter the coordinates of the Pokemon into iPogo, tap on the Pokemon and catch it! Sniping comes with a lot of rules you will have to follow to avoid being penalized.

Most of all, you will need to respect timers, depending on how far you want to teleport and interact with the game; this is called “cooldown” (explained just below). You can also “camp” a Pokemon if you don't want to miss it (also explained below).

#Top
The term “Camping” is used to describe the situation when you have to stay on the catch screen without throwing a ball or berry at the Pokemon until you can catch it and that depends on the distance and amount of time since your last action. You NEED to respect the cooldown times otherwise the Pokemon will flee. If you don't know what cooldown is, check the question just above!

What are Speed Raids?

#Top
You can do as many raids as you want continuously without triggering cooldown. You need to be off of your previous cooldown and you can't throw a berry or ball to the raid boss after the battle. You have to hit run and move to the next raid no matter where it will be. The point of speed raids are usually to find a shiny or a certain IV.

#Top
All the coordinates posted in our discord and app are only for trainers level 30 and above. If you have a level lower than that, the pokémon IV and CP will be random. Weather changing every hour may also change the IV of the pokémons. So if a pokémon is posted before 5PM, and you check it at 5:01PM and weather has changed, don't be surprised and always verify the CP before catching.

Is iPogo for Android?

#Top
iPogo it not for Android. iPogo is for iOS ONLY

#Top
Direct Download is no longer a viable option as Apple now targets certificates like that after mere hours. From now on you should create your own certificate using a computer or pay a service like Signulous to do it for you.

#Top
We currently suggest that you do not upgrade to iOS 14 due to Apples new App Attest System. We cannot garuntee iPogo will work

How do I install iPogo?

#Top
VIP is optional. It is a set of special (paid for) features to make iPogo that much better!
You can use iPogo on up to 3 instances of the app at the same time.
You can Click Here to purchase VIP or see what features it includes

How to catch Shinies Only

#Top
To catch Only shinies you can click on a pokemon and see if it is shiny. if it is, catch it. if it is not shiny, run away from it without triggering a cooldown and look for another.